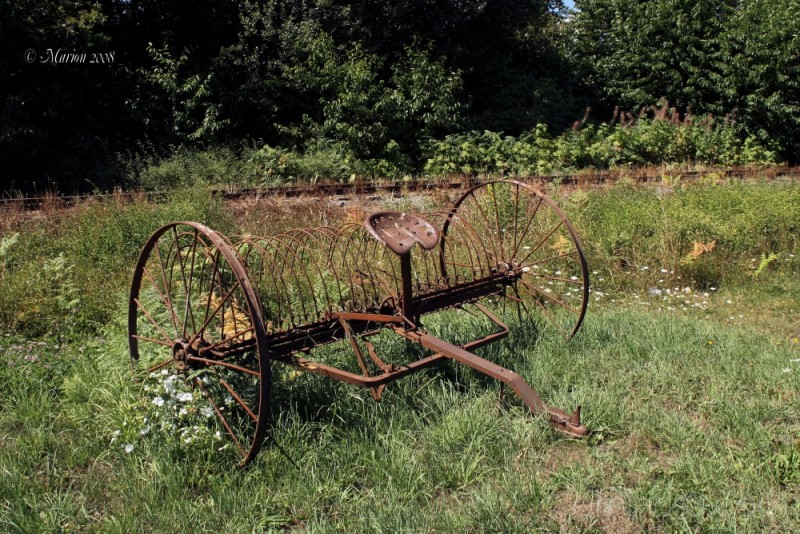 Previous Next
← previous day next day →

Posted by Marion (Nanaimo, BC, Canada) on 14 August 2008 in Business & Industry and Portfolio.

On Monday we stopped by the road side to get a hotdog and found a Horse Drawn Hay Sweep Rake sitting in a nearby meadow. A short description follows:

In the hayfield, the hay sweep (or sweep-rake) moved hay. The driver lowered the sweep's teeth (the long wooden tines) to ground level and took the sweep down a windrow of raked hay. As the sweep moved forward, the hay piled onto the buck (the platform of wooden teeth.)

a beautiful relic -- wonderful find! thanks for the history lesson -- i couldn't have explained exactly what it was for -- although i did know it was agricultural... :)

@dj.tigersprout: Me neither, I had to do a search on the net for antique farm equipment and this is what I came up with. I like you just knew it was agricultural....;))

I'm no farmer but that looks like a hay-rake rather than a hay-sweep. Bluestem has a pic of the very thing, perfect match. But, whatever it is, it looks so lovable standing there rusting away with our memories . . .

@Ronnie 2¢: Thanks Ronnie. It says hay-rake or hay-sweep. Perhaps the same thing. I wasn't at all sure what it was and did a search on the net before posting it so I could at least make some kind of half intelligent comment on it. :D Thanks again, always appreciate your visits.

I'd have zoomed on that wheel burrowed in white flowers.....The contrast of colours is most pleasant!

@Japanalia: Thanks Gabriela, I did zoom in on that wheel with the flowers and will be posting it soon !!

@Judy: I did and I will be sharing a couple more shots. Tomorrow's picture is of another old relic. I thought it amazing that no collector of farm antiques has picked these up. Like that old car that we are still saving for Mike. :)

Oh yes indeed a great find, such country charms, like me, I think you never leave home without your camera? right? ;)

@Lorraine: Never without my little pocket camera, but this day I decided to take my big baby and was ever so glad I did. There are so many shots that I miss though. When we are travelling down the highway I see so many beautiful vistas that I so badly want to photograph, but alas, no place to stop. Thanks for your comments on my self portrait. Not just a grandma, but a great grandma of little Aiden.

I love old relics of a simpler time. And the railway tracks in the background add to the nostalgia. Nice work.

Nice shot Marion,good sense of abandonment,the rails in the background are a good touch as well.

@Anthony: I know, I placed those rails especially for you. My sweet husband asked me this morning if they were the Vancouver Island rail line (We live on Vancouver Island) and I said, no honey, they are the ones on the mainline. Very sarcastic aren't I. Anthony, I really appreciate your comments

Really nice find - I like the composition and the railroad track behind the equipment. Did you try in b&w or sepia for a "period" look?

@Chris: I did Chris, but thanks for the suggestion. It will show up in a couple of days.

Interesting commentary. I have the seat to one of these and now at least I know where it came from.
Good shot.

Wow. Not something you see everyday! Nice one :)

Wonderful, Marion. Isn't it amazing how these work implements have become so photogenic.

My grandfather had a similar item that he called a hay rake. Probably colloquial. He always talked about the "artistry" involved in making haystacks that would hold up to the rain. Very nice shot. I love it when I just happen upon things to take pictures of.

@Jeff: Probably hay rake is the right term for this. It says hay sweep or hay rake in the commentary that I took off of the internet because I wasn't sure what the proper name was. Thanks for the comment. I too love it when you come across something like this.

good image, love the colour of the old metal

I'm late.... but better late than never. I had to laugh at you coming back twice :) it's all in the name of art.

This is a nice nostalgic kind of view, how old things just get left and fogotten. Great shot Marion, and lovely colors.

@Observing: Thanks Mike. I don't mind you being late. I used to try and do it at night before I went to bed because the pictures don't change where I am until 10pm at night, but found that kept me up too late. This week and last I have been doing while at my work station. I am a receptionist in a credit union and have been working full time. Needless to say my work is done fairly quickly in the morning and then I just get to sit here and look "pretty" and answer the phones, so blogging on Am3 makes the afternoons go so much quicker. Next week I will be on holidays and be away for awhile so things will change a lot. btw. it's 33C here today.

A real beauty, Marion ... great sense of nostalgia! I've seen many of these old timers sitting in fields and barnyards and they always remind me of my Dad speaking about his days on the farm as a youth ... thanks for the trip down memory lane!

amy from Nanaimo, BC, Canada

I love old stuff (you met Dan, right?! LOL!!) The tracks in the background add a great touch to the nostalgia of this image, Marion.

Good find... believe it or not my mom, who lives a few miles from here, has one of those in her yard....