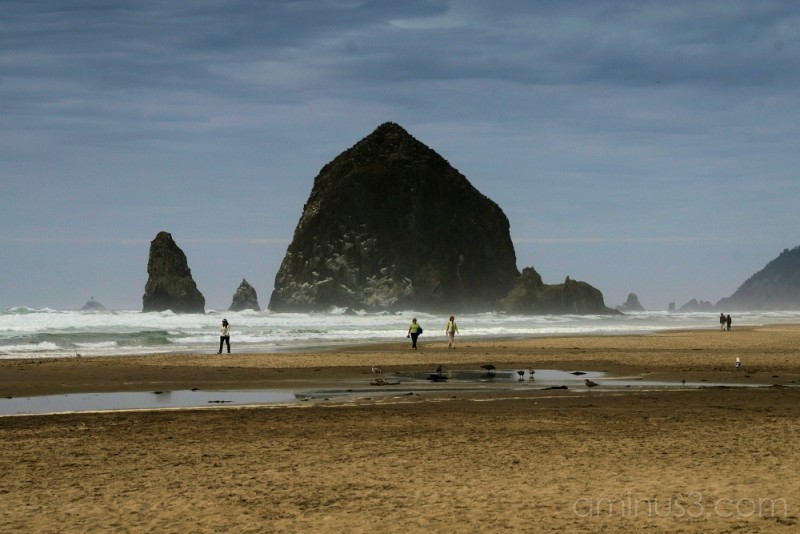 Previous Next
← previous day next day →

I want to go back

Posted by Marion (Nanaimo, BC, Canada) on 20 July 2008 in Landscape & Rural and Portfolio.

We rushed through Oregon and now I just want to go back and spend as much time as possible wandering through and along this beautiful coastline. This is Haystack Rock (one of three Haystack Rocks in Oregon) in beautiful Cannon Beach.

Haystack Rock is a 235-foot (72-meter) tall monolith (or sea stack) on the Oregon coast in the northwestern United States, the third-tallest such structure in the world. A popular tourist destination, the rock is adjacent to the beach and accessible by foot during low tide. Haystack Rock tide pools are home to many intertidal animals, including starfish, anemone, crabs, chitons, limpets, and sea slugs. The rock is also a refuge for many sea birds, including terns and puffins.

it truly is a huge rock!

That's amazing, Marion. A wonderful photo of it and thank you for the explanation! I don't think I'd put the camera down if I was there!

Fantastic wide beach, and those rocks look massive especially with the people in front.

I'm smiling at your title - how could we possibly tell? <grin> ... This is an amazing shot!

It is an amazing place and we didn't have the time there that you did before heading to WA, Vancouver Is, than back to WA for the ferry to Alaska. We'd love to go back also!

It's a really impressive view...

This is wild and dynamic. A beautiful image, Marion. I can almost smell the salt carried by the wind!

Oh man I'd love to be there, I really enjoyed your text as well, praying it gets sold soon ;)

Francesc B. from région parisienne, France

A big rock, of course... a beautiful contrast with the walkers.

Well, Marion, it's turned mid summer here and it is hot though still beautiful and green... sure does make that ocean water look good.

Really awesome, Marion (this is an example when that word really, really means something!!). Beautiful tones and compsotion ... excellent image!

Oh, what a fantastic location!!! just roaming about and taking shot after shot......wouldn't it be swell!!!!Dynamic ocean!Love it!

The people make you realise how large those rocks are!